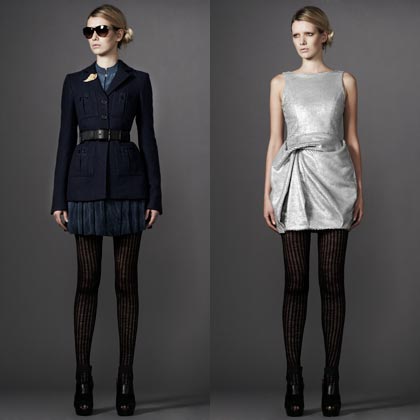 Who was there: Editors. And buyers of boutiques whose ladies love Wu.

What we thought: This marked Jason Wu’s first Pre-Fall collection and, fittingly, it was all about aviation. During the fall, the 27-year-old designer racked up the frequent flier miles when he visited such distant locales as Dubai, Beijing, Hong Kong, and London. The resulting garments featured elements of uniformity, which is a welcomed edge. Hints of masculinity arrived in the form of hefty belts, trim necklines, and well-defined shapes.

In keeping with the theme, this was also the first time that Wu worked with leather. No heavy bombers here, rather petite black boleros built into otherwise conservative dresses. Elsewhere there were sharp jackets lined in silk tulle which Wu also spliced between sequins to create a feather-like effect.

For ladies who still look to Wu for the classic mid-century femininity that he is prone to delivering, the crinkle chiffon dresses were effortlessly romantic.

With this new tweaked direction, and Michelle Obama’s ever-enduring support, there may be even more first time patrons wending their way to Wu.